You are here: Home / Library / Gilded Suffragists: The New York Socialites Who Fought for Women’s Right To Vote 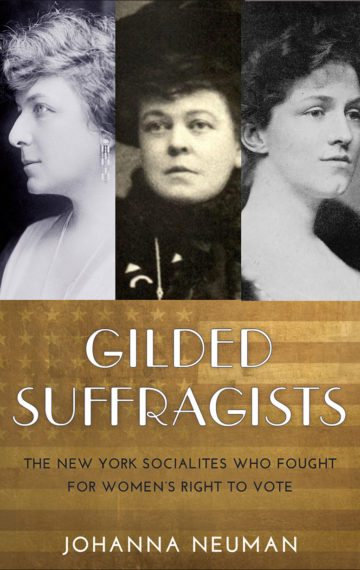 Buy From AmazonBuy from Barnes & NobleBuy from NYU Press

Gilded Suffragists: The New York Socialites Who Fought for Women’s Right to Vote, tells the until-now hidden story some of the nation’s wealthiest social figures—with names like Astor, Belmont, and Vanderbilt—who joined the movement. The media darlings of their day, they were chronicled by a thriving newspaper scene for every change of wardrobe, decor, and itinerary. When they leveraged their social cachet for political power—marching in parades, giving speeches, in some cases going to jail—they became the first celebrities to endorse a political campaign in the 20th Century. And like Oprah Winfrey’s endorsement of issues today, their embrace gave the movement a burst of media buzz, popularizing a cause said to be in the doldrums, taking the “Votes for Women” campaign from dowdy to fashionable.

“In this fast-paced and important book, Johanna Neuman shows us  how women of all classes built one of the most consequential social movements in American history.”
—SVEN BECKERT, LAIRD BELL PROFESSOR OF HISTORY, HARVARD UNIVERSITY

“These socialites made the red carpet their runway for the cause.”
—NORINE FULLER, EXECUTIVE DIRECTOR, FASHION INSTITUTE OF DESIGN & MERCHANDISING