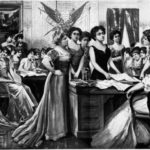 There is no formula for making social change, no elixir that propels a culture toward progress. But as a historian who specializes in the study of women’s suffrage, and author of Gilded Suffragists: The New York Socialites Who Fought for Women’s Right to Vote, I believe there were several elements that distinguished the cause. One was a […] 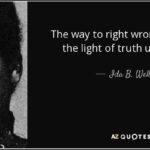 When I first looked at GirlCrew.com, I likened it to Facebook for women — a website that facilitates reunions, eases life transitions and creates online communities. And it is all of that. But the harder I explored this new “platform for women to make new friends,” the more I realized that it also promised the […] 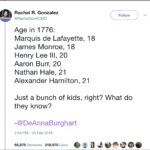 A meme making its way around the Internet speaks volumes to the marvel that young students from Marjory Stoneman Douglas High School — not yet eligible to vote — are leading a revolution in the politics of guns. Note this list contains no women — not even Betsy Ross, who at 24, as a trained […]

A few weeks ago my great-niece came home from school in distress. “The teacher said I was white,” she told her mother. “But we’re not white!” In the eyes of a six-year-old, people are the color she will need to find in her crayon box to draw them — peach or beige or cocoa […] 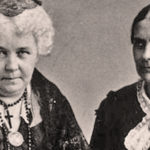 It was a shock to me to learn, when I was researching my new book, Gilded Suffragists: The New York Socialites Who Fought for Women’s Right to Vote, that the two matriarchs of the women’s suffrage movement in the United States — Elizabeth Cady Stanton  and Susan B. Anthony — campaigned against black voting rights in […]

As the nation’s capital readied for Woodrow Wilson’s first inauguration in March of 1913, activist Alice Paul made plans for a large suffrage parade of floats, marchers and theatrical representations. As I note in my new book, Gilded Suffragists: The New York Socialites Who Fought for Women’s Right to Vote, states often serve as incubators for […] 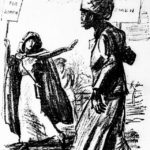 The history of the white women’s suffrage movement in America is a succession of attempts by black activists to join the parade — only to be pushed aside by expediency or bigotry. As we approach Black History Month, it is important to honor the insistence of African-American women that they had earned a place in […]