You are here: Home / Adding Women Back to History / Restoring Black Suffragists to Feminist History

A few weeks ago my great-niece came home from school in distress. “The teacher said I was white,” she told her mother. “But we’re not white!” In the eyes of a six-year-old, people are the color she will need to find in her crayon box to draw them — peach or beige or cocoa or chocolate brown or some combination of all of them. She would never use a white crayon for a Caucasian or a black one for an African. The whole vocabulary of race baffles her. It is something she will be taught. It is not innate.

I am six decades older than her, and my eyes are weary with the split-screen images of race in this country — so much progress, measured by economic and political achievement, by personal perseverance and friendship, and so much left to achieve, marked by the unfulfilled lives of those gunned down or cast aside unjustly or those who have lost all ambition for life.

Across this fragmented color line, the dialogue prompted by my recent blog post about the gilded suffragists who reached out to black activists has touched me with its intensity, anger, hope and wisdom.

Several of you wrote of your anger at whites for their hijacking of black history. As Veda Symes Senior put it, every cause — from 1960s feminists to today’s LGBT activists — seems to use the African-American fight against prejudice “as the “stepping stone for their individual injustices.”  So discouraged is she by this confiscation of her heritage that she is privileging race over gender. “My only fight is for Black justice first before any feminist desires.” After all, she added, ” We were Black first & always strong, get-the-job done women alongside our men before the white definition of feminist.”

Others expressed gratitude to learn that some suffrage leaders had at least attempted a racial rapprochement, and that this history is useful in the current political climate. “If we are going to overcome the foolishness coming from the Oval,” wrote Tina Terry, “it is going to take all of us … working together.”

Ayo Dowl wrote that she was delighted to learn more about the  black suffragists who were part of the movement because, as a seventh grade teacher, she found so little about them in school curricula.

Most importantly, Lindell Ray reminded those participating in the conversation that new books are on the shelves about the black women who persevered against the odds, who insisted on a role in a movement that kept pushing them away. 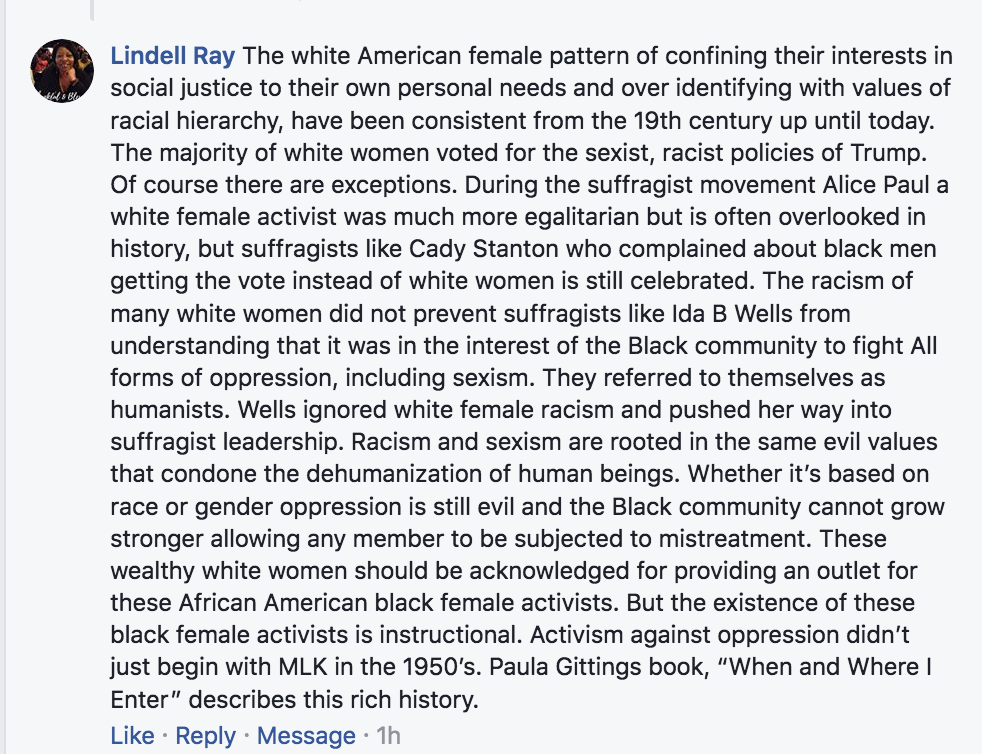 As Lindsey Ray mentioned, one of those books is Paula Gittings’ Where and When I Enter, The Impact of  Black Women on Race and Sex in America. Two more on my list: We Must Be Up and Doing: A Reader in Early African-American Feminisms, edited by Teresa Zackodnik, and my personal favorite, Colored No More: Reinventing Black Womanhood in Washington, D.C., by Treva B. Lindsey.

If you have an ancestor who marched in parades or petitioned Congress or picketed the White House or went to jail, consider sharing her story. We need to never forget her courage, to teach it to those seventh-graders.