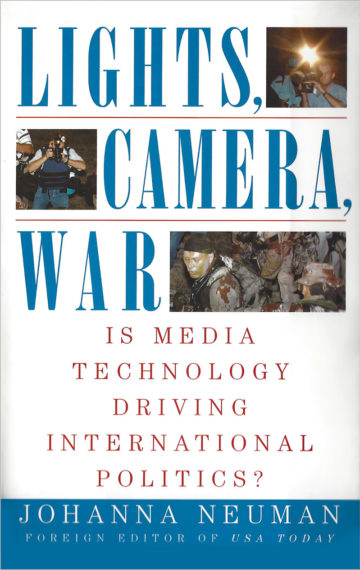 Lights, Camera, War is about an experienced journalist shatters the myth that today’s communications technology has an undue political influence, showing that throughout history new media technologies, from moveable type to the Internet, have blended with, but not radically changed, the way diplomacy works.

“This book, written by one of the country’s most experienced and thoughtful foreign policy journalists, explodes the myth that CNN and other news media have revolutionized the practice of diplomacy. Unlike much of the crystal-ball gazing concerning new information technologies, Johanna Neuman’s work is grounded in the careful study of history, where she finds that in previous technology revolutions, both diplomats and journalists have learned to get past the hype and adjust to new ways of doing business.” 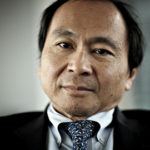 —Francis Fukuyama, author of The End of History and the Last Man.

Media Coverage of War APRIL 7, 2003
Ms. Neuman talked about her book Lights, Camera, War and about how the media was covering the war with Iraq. She also responded to viewer comments and questions.

The Gulf War was the first satellite-TV war, where viewers at home knew who was winning before the soldiers in the field did. The effects of satellite TV on world affairs may concern many, but not Neuman, foreign editor of USA Today, who writes that it “is a major check on government control of information” and, therefore, a major blow in favor of the people’s right to know. Neuman shows how the satellite compares with other inventions that changed history. First she looks at how the invention of the printing press helped fuel Martin Luther’s religious revolution. She finds that Samuel F.B. Morse’s development of the telegraph caused even more trauma than the power of satellite TV, because for the first time it brought events immediately to the people. She relates how the telegraph was used by journalists in the Civil War and how it fanned the Spanish-American War frenzy; the effect of the Zimmermann telegram on the U.S. entry into WWI; how Edward R. Murrow brought WWII “home” via radio; and how JFK used the “slowness” of television (as compared to the swiftness of satellites) to deliberate during the Cuban missile crisis. Neuman’s march through communication history is informative, a consummate study of the effect of communication on world events. Photos not seen by PW.
Copyright 1995 Reed Business Information, Inc.

For more than 500 years politicians and diplomats-and those who reported their actions and words-have viewed with alarm almost every aspect of technology’s advances: printing, telegraphy, photography, the telephone, film, radio, TV and its satellite transmission, and now the vast flow of knowledge in cyberspace. Neuman, foreign editor of USA Today and coauthor of the political mystery Knight and Day (LJ 5/1/95), agrees that each technological advance has sped up the processes of political leadership, diplomacy, and journalism. But her research has brought her to the conclusion that technology advances have not hampered good political leadership, good diplomacy, or good journalism nor, for that matter, the bad practitioners of those “arts.” In sum, with apologies to Marshall McLuhan, technology is not the message. Recommended for international affairs, media, and technology collections.
Chet Hagan, Berks Cty. P.L. System, Pa.
Copyright 1996 Reed Business Information, Inc